I’m in the middle of Silvia Moreno-Garcia’s mannerpunk novel in preparation for an author interview. The Beautiful Ones (St. Martin’s Press), released this week, is quite different from Moreno-Garcia’s contemporary work. I’d describe it as Vanity Fair with telekinesis. Manipulation is the major theme: of objects, and of feelings. The imaginary country the author conjures has elements of the Belle Epoque-era France; you can see the ormolu clocks, rococo architecture and hear the frou-frou rustle of silk. It’s billed as “romantic” but a Machiavellian undercurrent of social climbing runs through the novel. Plus, kudos for the allusion to a Prince song. 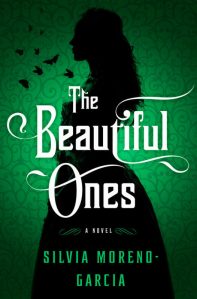 Antonina Beaulieu is in the glittering city of Loisail for her first Grand Season, where she will attend balls and mingle among high society in hopes of landing a suitable husband. But Antonina is telekinetic, and strange events in her past have made her the subject of malicious gossip and hardly a sought-after bride. Now, under the tutelage of her cousin’s wife, she is finally ready to shed the past and learn the proper ways of society.

But Antonina, who prefers her family’s country home to the glamorous ballrooms of the wealthy, finds it increasingly difficult to conform to society’s ideals for women, especially when she falls under the spell of the dazzling telekinetic performer Hector Auvray. As their romance blossoms, and he teaches her how to hone and control her telekinetic gift, she can’t help but feel a marriage proposal is imminent. Little does Antonina know that Hector and those closest to her are hiding a devastating secret that will crush her world and force her to confront who she really is and what she’s willing to sacrifice.

Check out my interview with two-time Shirley Jackson Award winning author Robert Jackson Bennett at the Washington Independent Review of Books. His new novel, City of Stairs, is really good.

The Warrior Who Carried Life by Geoff Ryman

“Cara’s mother had always said something very strange about dust: that it was the remains of the dead, and should be respected. “The air is full of other people,” she had told Cara. The dust in the sunlight looked like stars.”

The Warrior Who Carried Life is Geoff Ryman’s first novel, which has been reprinted by the Canadian Press Chizine. It’s a darkly mythic novel that combines the Epic of Gilgamesh with dashes of Celtic and Indian mythology.

A young woman whose family has been dishonored by invaders undertakes a vengeance-based quest to oust the evil from her land. To do so, she magically transforms herself into a male warrior who is nearly invincible. Along the way, she discovers the true nature of the invaders and her quest eventually leads her to the land of death. The novel is drenched in magic, not unlike Tanith Lee’s Tales From the Flat Earth series—there are fabulous beasts, wise women, immortality, and miracles. TWWCL engages and subverts mythic tropes left and right, recalling Samuel R. Delany’s classic novel The Einstein Intersection. Despite the magical overlay, this is a brutal story, full of shocking violence.

Many of the tropes and themes that ballast Ryman’s oeuvre are here. The violence and war of the imaginary land shares a tenuous connection with other Ryman works that chronicle and examine the horrors faced by Kampuchea (Cambodia)—e.g., The Unconquered Country & The King’s Last Song. It is also a deeply feminist and genderqueer novel, with a transcendent lesbian love story at its spiritual center.

Kill the Dead by Tanith Lee
My rating: 5 of 5 stars

The 1980 novel KILL THE DEAD is a perfect introduction to Tanith Lee’s writing in the Gothic mode. The short novel has all of her hallmarks: two tortured Byronic anti-heroes, a beautiful witch antagonist and a plot that is full of twists that allude to and subvert literary tropes. The novel concerns the mordantly humored exorcist Parl Dro, and his dealings with a hapless musician and a vengeful female lich (an undead sorceress). The prose is lovely and musical, full of rich imagery that incorporates Tarot symbolism throughout the text. The dialogue is is full of quips and dry humor. Some of Lee’s best work is at the novella length, and KILL THE DEAD, reissued as an ebook by Immanion Press, is an excellent example.

My story, Thy Father’s Lies, is now up on Wattpad. This is a postcolonial fantasy, a sort of prequel to Shakespeare’s The Tempest, told from the spirit Ariel’s point of view. Ariel is my favorite Shakespearean character, so in a way, this is a piece of fan fiction. Enjoy!

City of Bones by Martha Wells
My rating: 4 of 5 stars

An earlier entry in the Martha Wells oeuvre, City of Bones nicely balances her intricate, almost mystery-styled plots with her imaginative world-building. It’s admirable how the author manages a certain baroque richness to the prose, while maintaining a fairly action-packed, complex plot. The setting is a sort of post-apocalyptic fantasy world with a rigid caste system and strange rituals. Two outsiders stumble upon a mysterious artifact, and ultimately, a sinister world-threatening plan. The magic is magical and weird, and the suspense “pulse-pounding.” In a way, City of Bones fits into the New Weird aesthetic championed by China Mieville, in that it’s a little bit fantasy, a little bit horror, with a dash of science fiction and mystery thrown in for good measure. Fans of Mieville and Tanith Lee should check this book out. 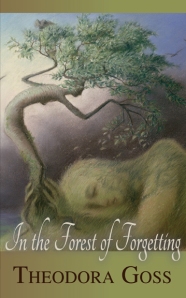 Since my colleague Theodora Goss announced a new ebook edition of her debut collection, In The Forest of Forgetting, I thought I’d share the review I did when the book was first released.

These delicately crafted, literary fantasies draw from Victorian morality stories and fairytales. The language is spare and considered, the tone dry spiked with mordant humor. Goss discreetly and elegantly updates the Gothic tale for postmodern times. Her “Emily Gray” stories concern a governess who grants children’s deepest wishes, at a terrible price. Three of the Emily Gray tales are here. The title story turns a breast cancer patient’s life into a magical fable. Other stories take place in Budapest, and have a flavor of Central European magical realism (“The Rapid Advance of Sorrow”), while “A Rose in Twelve Petals” fractures Sleeping Beauty into twelve different view points, including that of the spinning wheel that pricks the princess. Goss’s stories have dark themes, but she is too graceful a writer to be considered Gothic in the classic sense. Her painterly, humorous characters come alive, and her fantastical ideas are grounded in her character’s psyches.

All of the reviews I’ve read about A Stranger In Olondria talk about it being about bibliophilia, that is, the love of books. The love of books certainly does run through the novel, but I actually think it’s more about spirituality—with the written word being the locus through which transcendence is achieved.

The form the novel takes is the bildungsroman: a novel about the initiation of a youth into the wider world. Jevick is the son of a prosperous pepper merchant, a tyrant of a man who has two wives and controls a plantation on a tropical island. When it becomes clear that Jevick’s older brother is unfit for inheritance, Jevick is trained to be his father’s successor. A tutor from the distant, northern land of Olondria is hired, ostensibly to teach young Jevick the language and customs of that land in order to be a competent trader. But the tutor instills in the boy a love of the written word and an obsession with the exotic land.  Jevick eventually travels to Olondria on his first routine trade trip, and—very much against his will—becomes literally haunted by the ghost of Jissavet, a young woman and fellow islander he met on the voyage from the Tea Islands. Ghosts, in a heretical Olondrian religion, are considered angels, and those who communicate with them are living saints. When Jevick’s haunting becomes public knowledge, he is placed under arrest and becomes the unwilling pawn between two religious factions.

In spite of this fairly complex set up, the novel isn’t about politics. The narrative form is that of the memoir, or its even more antiquated cousin, the philosophical romance. Jevick’s narrative meanders, often interrupting the narrative flow to quote poetry or bits of Olondrian philosophy. It’s slow, and richly descriptive—a marked difference  the often breakneck pace of other fantasy novels. At times, the book becomes a travelogue—kind of like the books written by John Berendt (e.g., Midnight in the Garden of Good and Evil). Because of this solemn quality, the magic and the world-building is organic and believable. Other times, it has the elegiac melancholy of Hermann Hesse’s novels (particularly Steppenwolf and Siddhartha). The land of Olondria is a character. The country has a Mediterranean feel, in its fauna and cultures. The imaginary religion borrows from Hinduism and Egyptian mythology with a dash of decadence, resonant of the Greek mysteries.

The novel’s ending is ambiguous; no magic ring is recovered or kingdom conquered. Rather, Jevick, and Olondria itself, are spiritually changed. A Stranger in Olondria is a richly rewarding experience for those who love prose poetry and non-traditional narratives. Sofia Samatar’s debut novel is a fine exemplar of bibliomancy.