The movie IN FABRIC is infused with the ethos of hauntology, from the creepy soundtrack to the technicolor inspired palette. Ostensibly it’s a tale about a haunted dress. It tells the same story twice, like an anthology film (think of Trilogy of Terror). Act one centers around a recently single mother who’s going out on a series of terrible dates. She buys the bright red dress at a strange department store called Dentley and Sopor. The sales women wear elaborate Victorian funerary gowns and sport gravity-defying updos. The single mother Sheila, played by Marianne Jean-Baptiste catches the eye of the most striking saleswoman, played with sinister camp by Gwendoline Christie. Christie’s character speaks in riddles that pepper poststructuralist jargon with sales speak, about abstractions and paradigms with an erotic, hypnotic cadence that seduce Sheila to purchase the dress. The dress seems to have a mind of its own, and causes a series of bizarre occurrences—which I won’t spoil. Act Two follows a young couple who get the dress at a charity shop. Reg, a repairman buys the dress to wear at his stag party. He brings it home and the dress catches the eye of his fiance Babs, wherein the red dress plays out its seductive dance of death. Woven through the film are flashes of the empty department store, where the salespeople perform esoteric rituals with erotic overtones. The plot doesn’t really make sense; it relies on dream logic. The horror is stylish and textual rather than outright violent. The red dress slithers and floats and its filmed in lurid hues. It’s a mindscrew movie with mood whiplash. Did I mention that it has a bleak, black sense of humor? It seems to occur in an alternate world full of anachronistic tech (rotary phones, pneumatic tubes) and has an accompanying soundtrack of vintage synthesized sounds from a group called the Cavern of Antimatter. IN FABRIC is arthouse horror, in the tradition of A COMPANY OF WOLVES or the oeuvre of David Lynch.

A collaboration between musicians Todd Tobias and Chloë March, Amialluma is an album’s worth of atmospheric ambient music that desultorily drifts between a whimsical and eerie tone. All ten compositions have a distinct hauntological ambiance. The soundscapes have the feel of the soundtrack to a forgotten children’s movie. Music box melodies, echoed bell-like tones and 60s Sci-Fi sounds are woven together, mostly in a halcyon mood that gets disturbed by the occasional dark chord progression. March sings, purrs, trills, murmurs and chants words in an invented language that manages to be both soothing and disturbing, like a feral child raised by nature. The resulting suite (which is how it is supposed to be listened to) reminds of me of the work of the English band Pram, (who share a similar tonal palette crossed) with the Cocteau Twins at their most tranquil.

As much as I like traditional pop music and classic song structure, I love instrumental music. It’s the stuff that I write to, and that gives me ideas for fiction and scenes. The field of electronica and ambient is as white, straight and male as you can get, so it’s always a pleasure to find artists from marginalized communities appear on the scene. I recently discover two such artists that make electronic music that’s disturbing and beautiful. 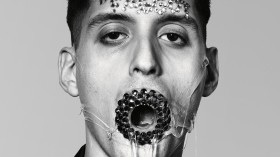 Both Arca (Alejandro Ghersi ) and Yves Tumor (Sean Lee Bowie, or not!) are queer men of color who infuse their electronic sound collages with a queer sensibility. Their ominous soundscapes, combine subgenres like EDM, industrial and hauntology, both of them play with genderfuck in their performances.