Check out the panel about children and horror fiction I did with  Gwendolyn Kiste,  Ian McDowell, and Eden Royce (mod Anya Martin) for the H.P. Lovecraft Film Festival.

Trilogy of Terror and Count Gore de Vol are mentioned!

Butcher’s Block (director Arkasha Stevenson), the third installment of SYFY Channel’s anthology mini-series CHANNEL ZERO (based on the creepypasta urban legends), was the most disturbing one yet. It was uneven in many ways, but visually arresting and ambitious.

Alice (Olivia Luccardi) and her schizophrenic sister Zoe (Holland Roden) move to an unnamed rundown city, where Alice takes a job as a social worker. Her first case is in an especially impoverished neighborhood called Butcher’s Block, a graffiti-filled area surrounded by a defunct meat packing warehouse and an overgrown park. The area, a is known for strange after-dark phenomena (in the form of marble staircases that lead nowhere), mysterious disappearances and poor, if not outright corrupt police activity. Alice’s first day shadowing an older Child Protective Services officer in Butcher’s Block ends in the apparently violent abduction of her clients—a mother and a child. Meanwhile, Zoe has a hard time adjusting to her drug regimen. Through her eyes, we see the whole story of the sisters; they both left a broken home, due to their mother’s severe mental illness, which Zoe has inherited. Both sisters discover the awful secret at the center of the park—that the people of Butcher’s Block are prey to the sinister, cannibalistic Peach clan who once owned the abandoned meat packing company.
Butcher’s Block weaves together several  thematic disparate strands–about family ties, heredity. It has deliberately complex characters, some of whom have hidden depths and grow (or regress) in the course of the show. Best of all, it is delightfully weird and extremely unsettling. Cannibalism and self-mutilation are only the tip of the iceberg in this show. I loved the different mixtures of horror on display. There’s Lynchian dark surrealism, a nod to Dario Argento lurid aesthetic, and a dash of cosmic horror. By no means is Butcher’s Block perfect. There are times when it slips into “the stupid plot,” and the mood whiplash is severe. But it’s an admirable entry into what I’d call “arthouse horror,” and besides, it passes the Bedchel test with flying colors.

The Flame Alphabet by Ben Marcus

“Language is another name for coffin.”

People have suddenly developed a debilitating, and ultimately fatal allergy to the speech of children. It seems to start with Jewish families, particularly an esoteric sect that listens to sermons via shortwave radio in private lean-tos. But soon the language toxicity spreads to everyone, with the result being that no adult can stand hearing or even reading language. Symptoms include “facial smallness” (presumably, the tightening of facial skin), tongue thickening, and malaise.

The novel unfolds in three acts. The first act focuses on a single family as they struggle with a daughter’s increasingly poisonous effect on her family. Narrated in the sardonic first person voice of Sam, who does everything to help his wife, Claire, who is in denial about the encroaching disease. Their 14-year old daughter Esther’s toxic speech syncretizes with her rebellious teenager phase, making her cruel, particularly to her mother. The family slowly falls apart, even as it becomes apparent that a pandemic has taken hold of the world.

The second act finds Sam separated from his family, as the children are quarantined. He begins working with a group of researchers, trying to develop either a cure or a new way to communicate, given that speaking is no longer safe. He clashes with the leader of the research unit, who is condescending and amoral. I will not discuss the third act, due to spoilers.

It’s a hard to categorize novel. It shares its topography with horror and science fiction, but it’s not a thriller. Part One is almost a family drama, while Part Two is almost an absurdist dystopian work. The plot often pauses for pages, as philosophy, religious parables and other discursive theories are floated by either the narrator or in discussions with other characters. The beautiful brutality of the prose is what propels the book forward.

For a book that’s about the end of language, it revels in its use. The descriptions of illness are expertly culled, and cause shivers. It’s almost as if the author wants to infect the reader with the disease described in the world of the novel. It’s disgustingly, compulsively readable, highly reminiscent of the body horror of David Cronenberg’s films.

I’m unsure whether or not The Flame Alphabet is an extended metaphor about the breakdown of human communication, a Biblical allegory or a linguistic horror story. I do know that it was deeply disturbing and wonderfully written.

What I Learned from this book:

1. Keep your plot in motion. The pacing of this novel is like a juggernaut. Relentless, full of suspense and strong enough to ignore any plot holes or inconsistencies. Hill wastes no time getting to the point.

2. Flawed characters are compelling but I found Vic to be too damaged to care about. I would have liked her to be a little more sympathetic. Maybe if there were more scenes between her and her family during the good times, or a scene or two of her working on the Search Engine books.

3. The Big Bad wasn’t as scary as his henchman, much in the same way that Darth Vader is more compelling than the Emperor. Part of this has to do with the fact that Bing Partridge was flamboyantly evil, and loved raping and torturing his victims. I hated being in his brain and reading from his point of view. Charles Manx, by contrast, is subdued.

4. Some of the writing gimmicks (bolded text and capitalization) were clunky and threw me out of the story. The main gimmick–ending a chapter with a dangling sentence and finishing it in the next chapter–was ingenious.

5. I loved the portmanteau magic system. Cars and motorcycle geekery; magic Scrabble tiles; magic bridges and pocket universes. It was fun and inventive.

6. The author wisely gives the reader plenty of nightmare fuel. Evil children! Haunted amusement parks! A moon with a face! Hill isn’t stingy with the dark surreality; he gives his readers a steady stream.

I learned a lot about crafting dark fantasy/horror fiction from this book. A couple of fine tunings, and this would have been even better.

I actually don’t think I write horror, as in flesh-eating zombies or vampires or splatter punk. I tend towards dark fantasy or ‘weird’ fiction. But there is a definite darkness in what I write. And the forthcoming collection (not to mention the eBook series, Variations) has at least one piece that could be considered straightforward horror.  Someone always asks me why I write what I write. Why so dark, so pessimistic?

Part of me wants to use the ‘channelling voices’ excuse: that the characters  just sort of use me as a vessel to tell their stories. And I think every writer has a moment when they feel that: Where did that come from? But if I am channelling voices, why are they such sad, and at times, disturbed voices? 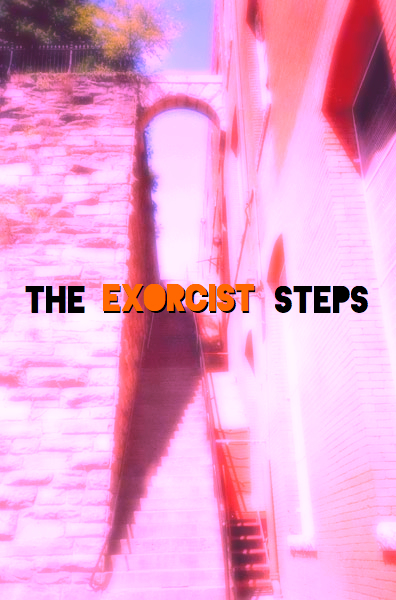 A large part of me being drawn to dark fiction is, of course, I grew up on horror. I macerated in it.  I live in DC, where the movie The Exorcist took place, and the true story that inspired it happened in just-across-the-border Mount Rainer. It was a young rite of passage to visit the terrifyingly rickety Exorcist steps in Georgetown. Stephen King burst on the scene in my childhood. I remember, vividly, those lurid covers from the 70s. Cryptozoology was serious business. I used to devour books documenting the existence of Bigfoot, the Yeti, the Jersey Devil, and nearby Maryland’s own ominous Goatman. I even had an aunt who told me her creepily prophetic dreams. Summers we went to Atlantic City where, at the time, there was still a freakshow that featured a fearsome Ape Girl who would escape and bum rush the audience.

Or maybe it’s something more. I learned pretty young that the world is a terrible place, full of disease, torture and worse. I think I write dark fiction and about dark subjects because its cathartic, and helps me work through the fear and anger I have. The ‘voice’ I am channelling is my own subconscious. I contend, in my own fiction, the real world horrors my characters face are often worse than any supernatural demon.

Tinkerwench is a horror story, written from the point of view of a club drug. It was written in the late 90s, when Ecstasy and Crystal Meth (or “Tina”) were in the gay club scene. At the time, my (ex) roommate was in the full swing of a meth addiction.

Beloved may be the only horror novel to win a Pulitzer Prize. And it is a horror novel, in my opinion. It makes use of the tropes supernatural gothic fiction (in this case, a vengeful ghost) to examine the dehumanizing effects of America’s great sin, the Peculiar Institution of slavery. Beloved is, of course, also a historical novel that takes as its jumping off point a historical footnote about an escaped female slave who murdered her own child rather than have her be raised in slavery. But Beloved, the spirit of the murdered infant come back as a young woman forms the bulk of the novel.

Sethe (perhaps her name alludes to Lethe, the Greek river of forgetting) has escaped with her four children from Sweet Home, a hellish plantation where slaves are routinely tortured. When the foreman, the sinisterly named Schoolteacher, finds her in Ohio (a slave-free state), he witnesses her slitting the throat of her unnamed infant daughter. He declares her a wild animal and not fit for slave service. The murdered child becomes a poltergeist, driving away both her sons after a few years with her wild antics. When a fellow escaped slave, Paul D, arrives at Sethe’s house, the ghost child is temporary banished.

Beloved comes back in corporeal form, as a young woman. Forget Samara (the video ghost girl of the Ringu trilogy) or the possessed Regan McNeil (The Exorcist) or even telekinetic terror Carrie White. Beloved could have them for a light lunch. Because Beloved is a cipher, and her agenda is never clear. She is endlessly hungry, for Sethe, for love, for experience, for sweets. Does she want to possess Sethe—both figuratively and literarly? Or does she want to destroy her? Beloved is every wrong thing about slavery and racism given form, and she will do anything—to fill her endless, aching and damaged need. Beloved is beautiful, seductive, perverse and brutal.

Morrison’s Faulkner language quivers and fractures in her attempt to capture the essence of this spirit. The imagery she uses is violent and disturbing—light, blood, sugar are invoked. Because Beloved has a strong historical subtext, its horror is even more powerful.