I will be in a panelist for this event in NYC, on April 8. Dr. Philip Kadish will be moderating, and fellow panelists include Jennifer Marie Brissett (author of Elysium), and Dr. Andre Carrington (author of Speculative Blackness: The Future of Race in Science Fiction). It will be held at the CUNY Graduate Center at 6pm.

A panel discussion with science fiction scholar Dr. André Carrington (Drexel Univ.) and science fiction/ fantasy authors Jennifer Marie Brissett and Craig Laurance Gidney, moderated by Dr. Philip Kadish (Hunter College) to celebrate diversity and dissect racism, homophobia, and sexism in the world of sci-fi publishing and fandom.  Special attention will be paid to  the highly-publicized hate campaign at the 2015 Hugo Awards. A group calling itself the “Sad Puppies” gamed the voting system to assure that most award nominees were white, male, and straight, voicing public statements about gay, black, and women’s themes and authors ruining the genre. This episode mirrors “gamer-gate,” where rape and death threats were made against women in the video game industry who have complained about sexism. 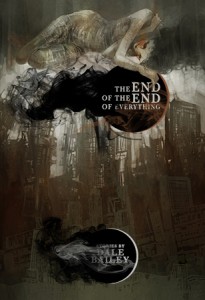 Happy Book Birthday to my colleague (we did a workshop together) Dale Bailey’s new collection of speculative fiction, The End of the End of Everything. His work is filled with poetic, Bradburyesque prose, keenly observed characters and inventive plots that range from time travel stories to alternate history to apocalyptic horror.

My author interview with Bailey will appear sometime soon.

Check out my interview with two-time Shirley Jackson Award winning author Robert Jackson Bennett at the Washington Independent Review of Books. His new novel, City of Stairs, is really good.

Cori had no way of imagining a velvet people who spoke through balletic motions and muscle spasms, arced arms and bent necks. A nation that consisted of beings who were physically similar to humans but biologically distinct. A people who thrived on human nectar.

The bulk of the story is told through the alien’s eyes. But there is a point of view shift, when we understand the transcendence and healing that Cori feels through the encounter:

Cori’s entire life, it could be argued, was an attempt to avoid any event such as this one. For years, he discretely avoided eye contact with men who wore their privacy in public like an expensive coat of chinchilla.

Both creatures, human and alien, experience a hallicination-ridden orgasm that acts as an exorcism for Cori.

He couldn’t remember his closet…

He is freed by the sexual act. It is liberating. Salaam drenches the story in sensory overload, with sentences that sing.

Kiini Ibura Salaam finds the balance between visionary poetics and science fiction in this tale and others.

City of Bones by Martha Wells
My rating: 4 of 5 stars

An earlier entry in the Martha Wells oeuvre, City of Bones nicely balances her intricate, almost mystery-styled plots with her imaginative world-building. It’s admirable how the author manages a certain baroque richness to the prose, while maintaining a fairly action-packed, complex plot. The setting is a sort of post-apocalyptic fantasy world with a rigid caste system and strange rituals. Two outsiders stumble upon a mysterious artifact, and ultimately, a sinister world-threatening plan. The magic is magical and weird, and the suspense “pulse-pounding.” In a way, City of Bones fits into the New Weird aesthetic championed by China Mieville, in that it’s a little bit fantasy, a little bit horror, with a dash of science fiction and mystery thrown in for good measure. Fans of Mieville and Tanith Lee should check this book out.

A successful Science Fiction romance is a difficult thing to achieve. Part of it has to do with SF fans not wanting the romance part to interfere with scientific extrapolation. (In my experience, Romance readers are far more catholic in their tastes). The potential for camp (I’m thinking of Jacqueline Sussan’s Yargo), and the marketing of such a book add yet more layers.

Karen Lord’s second novel is completely different from her debut, the excellent retold/remixed Senegalese folktale Redemption in Indigo. It’s a love story hidden in and around a LeGuin-style anthropological quest/planetary travelogue novel. Mostly narrated in the first person by the vivacious and chatty government biotechnician Grace Delarua (with lots of clever asides and some exclamation points), The Best of All Possible Worlds follows the fate of the stoic, telepathic Sadiri, who have been relocated to Cygnus Beta after a viscous and unprecedented massacre on their home planet. Cygnus Beta is a sort of galactic dumping ground for orphans of the three strains of humanity (the Sadiri, the Ntshune, and the Zhinuvians). As such, there are trace elements of all cultures seeded and hidden in the large planet. Since the Sadiri population has been mostly decimated, they feel that they have to build up their population. Grace is assigned to assist the Sadiri in their quest to find suitable cultures and mates on Cygnus Beta.

Grace’s main contact is Dllenahkh, who is the de facto leader of the mission, which mostly consists of visiting various settlements and cultures on the planet, and doing genetic testing. In this sense, Lord’s novel is almost a ‘mundane,’ or slice-of-life SF novel. There are no superheros or monsters, and the book has a leisurely, episodic pace—kind of like life. Because of that, Lord mostly focuses on the bizarre and intriguing chemistry between the impulsive Grace and the inscrutable Dllenahkh. Dllenahkh is neither a brooding hero or a Spock-like ascetic. He is a believable alien with odd flashes of recognizable human behavior that seem to surprise even himself.

Plotwise, there are a lot of incidences and strange, ‘sense-of-wonder’ set pieces, which I won’t spoil. They aren’t just there for window-dressing for the Grace-Dllenahkh love story; various ethical issues are addressed, from the issue of ‘cultural purity’ to religion, to the issues around telepathy and privacy. (Because of this, the plot does tend to meander). Additionally, Lord does through a bone or two to techno-fetishists—with shades of Iain M. Banks Culture novels. But The Best of All Possible Worlds is ultimately a relationship novel. No, it’s not a Nicholas Sparks novel set in a far future; imagine Jane Austen at her most psychologically astute as written by Ursula LeGuin at her most cerebral.