Shirley Jackson’s work is disguised in the trappings of genre fiction, particularly horror and thrillers. What she really does is use the tropes of horror to create complex psychological character studies. The 2018 adaptation of We Have Always Lived in the Castle is refreshingly true to the thematic concerns of the novel upon which it is based. Set in the 1960s, the two Blackwood sisters live apart from the town over which their decaying mansion casts a shadow. Both are living sequestered away due to the scandalous murder of the Blackwood patriarch and his wife—they were poisoned with arsenic. Constance (Alexandra D’Addario) was acquitted but the town folk believe that one of the two sisters is guilty of the crime. Mary Katherine or Merricat (Taissa Farmiga) bears the brunt of the town’s abusive gossip when she visits for supplies. Merricat, who is portrayed as possibly on the spectrum by Farmiga, is a misanthropic loner who does arcane witchcraft-inspired rituals to protect the surviving members of her family, which include Constance and dementia-affected Uncle Julian (Crispin Glover). Merricat buries dolls, coins and books on the manse’s overgrown grounds and casts curses on those people who are cruel to her. Constance stays in the house, where she cooks and cleans with an almost Stepford Wife devotion. The three members of the family all assiduously talk around the fatal events of the poisoning and the subsequent trial. Merricat believes that her spells are working until cousin Charles shows up out of nowhere, with an unclear agenda.  Constance, who’s played as a wide-eyed, innocent ingenue by D’Addario, is charmed by Charles. Sebastian Stan’s portrayal is appropriately slick and two-faced. He’s frustrated that he can’t charm the taciturn Merricat like he can her sister. (Uncle Julian believes that Charles is his brother, and Glover gives the befuddled character a quiet dignity). Inevitably, the battle for Constance’s affection yields disastrous results. There are a lot of thematics at work here.  There’s Jackson’s preoccupation with group hysteria, and the role of misfit women in a strictly patriarchal society alongside an exploration of trauma and the loss of innocence. I enjoyed the look of the film, with is period Popoluxe aesthetic, and it captured the delicate balance of black comedy, social satire and dark group dynamics that was in the book. 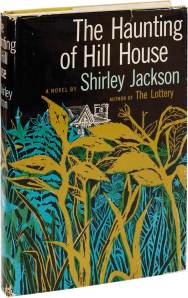 Shirley Jackson’s 1959 novel, The Haunting of Hill House, updated the ghost story, and used its various tropes to create a new kind of character study. (Forget those douchetastic ghosthunter shows—this team has a suave elegance to their work). It’s mostly the story of Eleanor, a lonely, mousy misfit of a woman who slowly and disturbingly falls in love with the foreboding, architectural monstrosity known as Hill House. Eleanor has an active imagination and never seems quite connected with the mundane world. She comes alive in Hill House, where she is a part of parapyschological research team. And the house, seemingly, seems share her affections. It communicates with her in ways that are scary….and oddly, tender. The reader wants Eleanor to join with her beloved, and escape from it at the same time. Jackson creates marvelous secondary characters—the brash, chic probably lesbian artist Theo, the bratty playboy heir to Hill House Luke, and doddering Professor who heads up the research team. She also adds a kind of mordant humor, such as the dour doomladen housekeeper. Jackson’s prose is written with a delicate beauty that suffuses even the more suspenseful set pieces; neither movies that used the book as source material manage to capture that sensibility. The Haunting of Hill House is novel that stays with reader. It leaves you with deep, lingering horror.