If the American spirit were to be personified, she wouldn’t look like Lady Liberty. She would be a woman of color with scars on her flesh, calligraphic tattoos of pain and suffering. All of the progress and expansion of the U.S. has been gained through the genocide of the indigenous population and slavery. (Not to mention the initial hazing period that many immigrants still go through). This sordid history is sometimes hidden or romanticized.  When I was a student at a mostly white high school, I distinctly remember my 10th grade history teacher made a point that some masters loved their slaves and treated them like family. Mind you, I was not militant back then. Far from it. But I knew that I was being feed a line. I recall thinking to myself, why does she want to believe that so damn much? This desire to turn the matter of slavery into a Gone With the Wind fantasy of crinoline hoop skirts, palatial mansions and sassy, loyal mammies most recently surfaced during the Paula Deen affair. 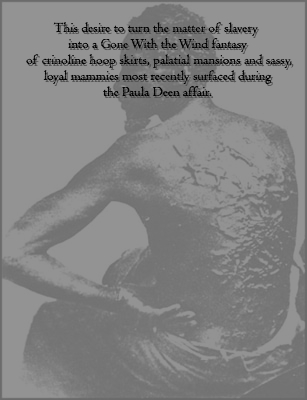 Yesterday, I saw Twelve Years a Slave with my mother. That movie should be required viewing for all Americans. The scenes of torture are beyond horrifying. They are soul-destroying. I found myself wishing that the black characters would all commit mass suicide. The movie goes beyond the whippings and dehumanization. It illustrates the mindset and the methods to bolster the Peculiar Institution. The enslaved had to be constantly terrorized and believe that their lives were expendable in order to maintain the status quo. The beatings in this film are relentless and graphic. Solomon Northup encounters two masters during his enslavement. The ‘kind’ master simply lets his overseers do his dirty work. In the end, Northup is sold to the ‘bad’ master, who has a more hands-on approach. Both masters are nominally Christian, with the second one given to bouts of religious mania, even as he abuses his ‘property.’ The mistress of the house wears outfits to rival Scarlett O’Hara’s, sumptuous gowns of silk, velvet and lace. But beneath the surface trappings of grace, she has a sadistic streak. Black people were things, beasts of burden to these ‘people.’

A recent article in the Guardian had a critic questioning why yet another film needed to be made about slavery. It was an article steeped in privilege, blithely unaware of how slavery is is belittled in the American discourse.

I wish that my 10th grade history teacher had watched this movie.