Pepper is a working class furniture mover who, through an act of misguided gallantry, and the laziness of the a trio police officers, gets thrown into a psychiatric unit in Queens. What is initially supposed to be a 72-hour hold turns into a months long stay, due to bureaucratic incompetence and Pepper’s foolish decisions (a failed escape attempt among other mistakes). After being drugged and reprimanded, Pepper finally acclimates himself to the ward, he meets his fellow patients/prisoners and learns their back stories. Loochie (or Lucretia), the nineteen-year bipolar young woman who’s been in and out of hospitals for most of her adolescence and has a wild temper and can kick ass if need be. Dorry, an old white woman who’s been in the ward for decades and is full of wisdom. And Coffee, a Ugandan refugee who is obsessed with contacting the president and letting the world know about the miserable conditions at the New Hyde psychiatric unit. 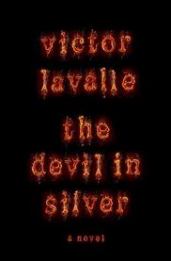 And miserable the conditions are. The building is in need of repair, there’s a rodent problem, the administrators are overworked,  and code violations are routinely broken. Finally, there is a violent patient, whom the patients call the Devil, who picks them off one by one. The staff seems to be in some conspiracy with the Devil, and steadfastly refuses to do anything significant to stop the murders.

If all of this sounds grim and depressing, it’s not. Humor—sometimes gallows and sometime Keystone Cops like—suffuses the text. There’s suspense, yes, but it’s also backed up by mordant social commentary about the state of public mental health and touching back stories for all of the characters—including various staff members. LaValle has created a horror story, a Swiftian satire, and a black comedy of errors in one story. Imagine Colson Whitehead writing One Who Flew Over The Cuckoo’s Nest and you have some idea of The Devil In Silver. It’s a powerful novel, and I want to read more LaValle!