By day, Henry Darger was janitor. He’d had a hard life; he had been orphaned and raised in a Boy’s Home in Chicago. He spent his days doing menial work at a Catholic Hospital, and went home to a dank basement where he lived as a hermit. But in that basement, there existed another world, one that he created. Nights he created an imaginary world full of winged beings, child slaves and heroic princesses. He was writing a novel, an epic set on a magical world where good and evil clashed. This world was meticulously illustrated, with eerie murals created from paint and collage.  He is considered to be the ultimate example of an Outsider Artist. 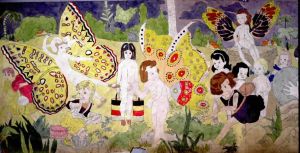 The intensity of his vision is admirable. It was a burning passion, almost a madness. Darger was compelled to write and illustrate thousands of pages of this story, with no intention to publish. His work was only discovered after his death. There are times when, as writer, you feel that you’re just writing for yourself. For Darger, that was enough.