When I was a child of ten or so, I wanted to be a writer (and illustrator) like the authors idolized. I decided to read as many “classic” children’s books as possible, mostly using the Newbery Award Winners as a reading list. One of the books on that list was Doctor Doolittle, by Hugo Lofting. I had seen the (1960s) movie and assumed that the book would be similar, if not the same. Not only wasn’t it similar, it came with a heaping dose of open racism. In one scene, the good doctor bleaches a black man white so that he can marry a white woman. I was so disturbed by this scene that I did not finish the book. At ten, I wasn’t “woke,” so I just filed the racism away and lowered my expectations of becoming a Famous Author. I learned that Famous Authors were white people.  I also learned that Famous Authors could get away with blatant racism. 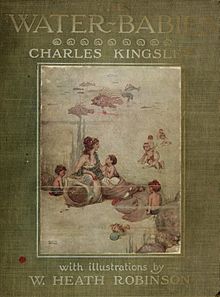 Doctor Doolittle, of course, was not the only book that had blatantly racist messages. There was the Victorian fairy tale novel The Water Babies by Charles Kingsley, which outright stated that black people were ugly and stupid. (I hunted down this book after reading Alistair Gray’s novel Lanark, which references Kingsley’s book). There was a passage in Frances Hodgson Burnett’s classic novel The Secret Garden where the spoiled brat heroine blithely claims that people of color aren’t even people. (I loved the Burnett book anyway). I had to stop reading A Cricket in Times Square by George Selden because one Asian character spoke in pidgin English. (By the time I encountered that book, I had read Laurence Yep and could spot harmful stereotypes).

The Association for Library Service to Children recently removed Laura Ingalls Wilder’s name from its award because of racism in the Little House books. I never read the Little House books; I did like the television show with its plucky tomboy protagonist and her nemesis, the campy villainess Nellie Olsen. Apparently, the books have some moments of severe values dissonance, with racist portrayals of Native Americans (who were displaced from their land by the Homesteading Act) and in one scene, Pa and a bunch of his friends put on a minstrel show, complete with blackface. Of course, naysayers are screaming about how such an action is on the slippery slope Book Banning and Burning, and how this is tantamount to censorship and another attack by the Tyrannical PC Snowflakes.

I think about all the Native and black children who come across these stereotypical portrayals, and the racist message they absorb.